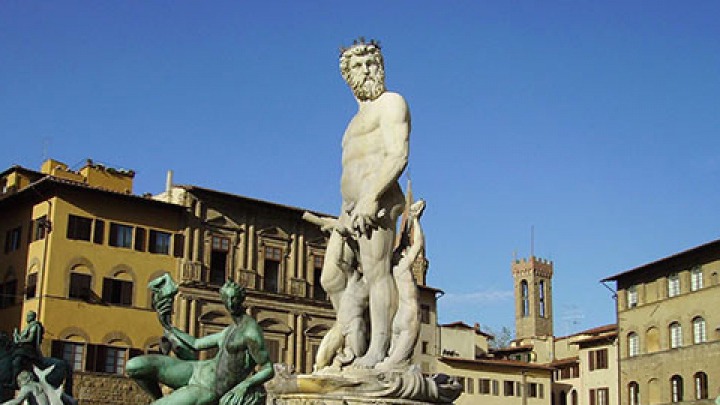 Right in the center of Piazza della Signoria in Florence, erected close to the Palazzo Vecchio we find the beautiful Fountain of Neptune created by Bartolomeo Ammannati and Giambologna and built between the years 1563-1565 on the occasion of the inauguration of a new aqueduct and known in Florence like Biancone, for the whiteness of the marble used.

At the foot of Neptune we find three tritons playing shinbones that gush with water. The triton was, in Greek mythology, the son of Poseidon or the God of the sea. Triton was known as the River God. It was commonly represented with the upper half of the body in human form and the lower half in the shape of a fish.

The basin is octagonal and contains the four horses of Neptune, two in white marble and two in pink marble, the wheels of the horse chariot contain the zodiac signs, symbolizing the passage of time

At the corners of the pool there are groups of marine divinities such as Teti, Doride, Oceano and Nereo. Each of which has at the feet of the nymphs, satyrs, fauns made by Giambologna. We note the great art of Giambologna, sculpting masterpieces of sophisticated elaborations typical of Florentine mannerism.

The figure of Neptune is made of white Carrara marble and recalls the somatic features of Cosimo I de 'Medici who alluded to the dominion over the seas of Florence.

In front of the basin we find a bronze epigraph engraved with the place where in May 1498 Girolamo Savonarola with Domenico Buonvicini and Silvestro Maruffi was hanged and burned. Right here every year, on the anniversary of the preacher's death, the fiorita in memory of the friar is celebrated.