Franz Xaver Messerschmidt, born in Bavaria in 1736 into a family of modest craftsmen, was one of the most fascinating sculptors of the Enlightenment. An academically trained artist, he obtained widespread approval in Vienna thanks to some original portraits, made for the Empress Maria Theresa and her court. After a study trip to Rome he was among the first sculptors to break with the sumptuous works of the Baroque tradition in favor of the more composed rhythms of Neoclassicism.

At the height of his success, around 1770, Messerschmidt's life was shaken, however, by a profound personal crisis, possibly caused by mental problems, which led him to leave Vienna and move to Pressburg, today's Bratislava. Here, while continuing from time to time to make portraits on commission, he devoted himself mainly to what are his most famous works of him, the "heads of character". According to witnesses of the time, these portraits, characterized by expressions ranging from a firm classical impassivity to the most exaggerated and grotesque grimaces, constituted for Messerschmidt a means of keeping at bay and exorcising the demons by which he felt persecuted.

After Messerschmidt's death at the age of forty-six in 1783, the "character heads", partly cast in a tin and lead alloy, partly in alabaster, were inherited by his brother Johann Adam. Some were sold individually, but a group of 49 heads was sold en masse to a single buyer, and for over a century these works were repeatedly exhibited for public enjoyment as a freak.

On the occasion of the first exhibition, which took place in 1793 at the Civic Hospital of Vienna, an anonymous booklet was published, in which the sculptures, defined for the first time "character heads", were numbered and identified with titles that describe them in a way ridiculous and grotesque and which, in the absence of valid alternatives, are still in use today. Purchased later by a certain Joseph Jüttner, they were exhibited again in Vienna in 1835, while in 1839 the newspaper "Der Adler" dedicated an article to them to which was attached a supplement illustrated with a lithographic image in which all forty-nine works are represented, fundamental testimony for their identification.

In 1889 the whole was dismembered and the 49 heads were auctioned separately. A dozen were purchased by urban planner Camillo Sitte as teaching material for the Staatsgewerbeschule (State School of Applied Arts) of which he was director, two more entered the collection of Emil Zuckerkandl and his wife Berta, whose living room was later frequented by some protagonists of the Viennese Secession, such as the painter Gustav Klimt and the architect Josef Hoffmann. The artistic and critical re-evaluation of Messerschmidt's work dates back to these years. On the one hand, the avant-garde movements, from the Secession to Expressionism, perceived its modernity and profound innovative power, on the other hand the new theories of psychoanalysis sought to shed light on the sculptor's creative processes.

A completely new approach to Messerschmidt's work, in fact, was offered in 1932 by the studies of Ernst Kris, an art historian but also a follower of Freud's theories on psychoanalysis who, analyzing not only the artistic production but also the biographical events, arrived to the conclusion that the sculptor suffered from schizophrenia and that the "character heads" are a product and consequence of his illness. The interest towards Messerschmidt then went on growing progressively especially in the German-speaking countries, until it became, in the last decade, a real international phenomenon to the point that his works are now sought after by museums all over the world. world.

Messerschmidt left no indication as to the meaning of the heads and what they represent. In the absence of other information, the main testimony to try to understand these singular works remains the report of the Berlin journalist Friedrich Nicolai who, in 1781, during a trip to Vienna, went as far as Bratislava specifically to meet the artist and to see him. at work in his shop. According to Nicolai Messerschmidt he claimed to be persecuted by spirits who tormented him morally and physically, inflicting pains on him especially in the lower abdomen and thighs.

He then, looking in a mirror, pinched himself strongly in different parts of the body, posing his face in a series of grimaces, through which he was able to dominate the evil force that tormented him, which he called the "spirit of proportions". The heads were therefore a means to immortalize and fix one's face deformed by grimaces.

The theory of Ernst Kris is mainly based on Nicolai's story, published in 1785, which sees the prod 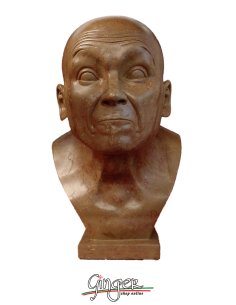 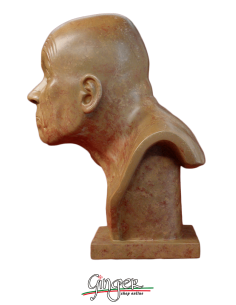 Out-of-Stock
Famous statues ... but not only 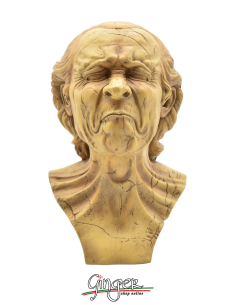 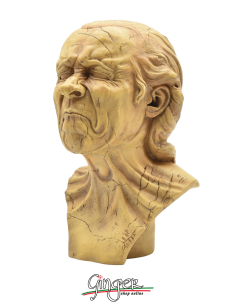 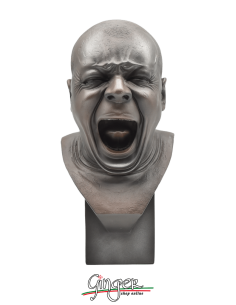 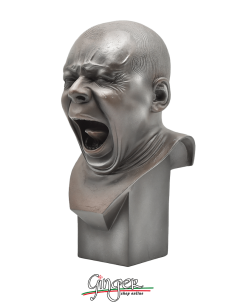