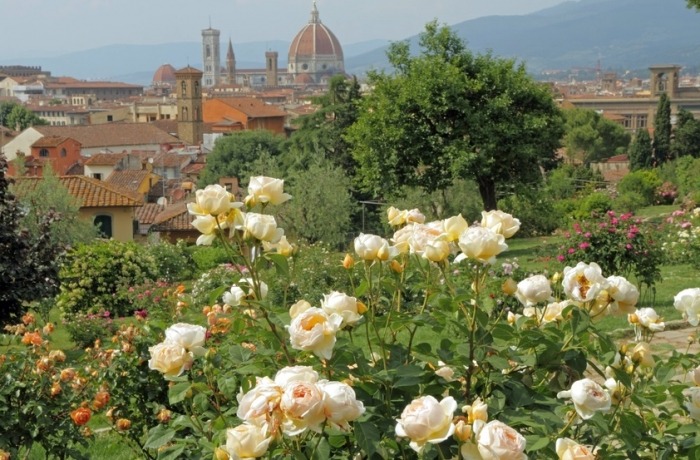 When it comes to Florence there are plenty of places to visit. One of these is surely the Rose Garden. The Garden of Roses in Florence is a park in the area of ​​Oltrarno below the Piazzale Michelangelo to the west, in Viale Giuseppe Poggi. It was built in 1865 by the same architect of the square, Giuseppe Poggi on behalf of the City of Florence in anticipation of moving the capital of Italy from Turin. It covers about a hectare of terraced land which offers a panoramic view of the city, enclosed between the current Viale Poggi, via di San Salvatore, and via dei Bastioni. Already it belonged to a house of Filipino fathers property and called "farm of San Francesco", was later score in terraces by Attilio Pucci who used his position and the retaining walls of the terraces to give life to a collection of roses. In 1895 the garden was opened to the public during the Festival of Arts and Flowers. Built according to the French model, it has a natural bucolic setting, yet streamlined. In 1998, the garden has been enriched by a space donated by the Japanese architect Yasuo Kitayama, Japanese oasis Shorai, donated to Florence by the twinned cities of Kyoto and by Zen temple Kōdai-ji. Since September 2011, the Garden houses ten bronze sculptures and two Belgian artist Jean-Michel Folon chalks.