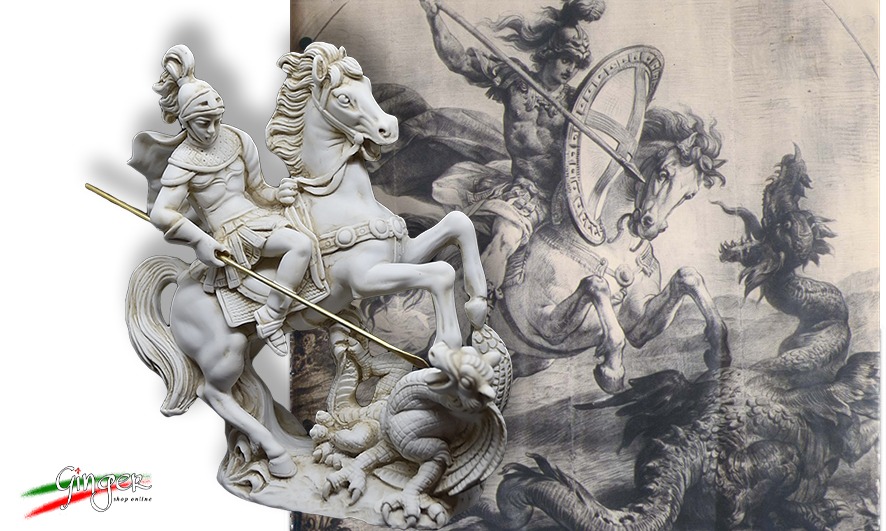 St. George is one of the most revered saints in the world and the flag that bears his name has become a symbol of many towns and cities.

It is said that George was born in Lod (now in Israel) between 256 and 285 to a Roman officer and a woman from Palestine and was soon converted to Christianity by his parents. As a young man, George presented himself to the emperor Diocletian and, thanks to the figure of his father, he managed to get himself enlisted in the army and then become the emperor's chosen guard. In 302, however, Diocletian issued an edict that provided for the arrest of Roman Christian soldiers. George then, in the name of all Christian soldiers, rebelled to defend his faith. Legend has it that Diocletian did everything to convert him to Roman paganism with numerous gifts, all of which George refused. Then Diocletian had him tortured and decreed his death sentence, for which George was declared a martyr by the Christians.

The legend of the dragon

The story of the dragon is very famous, so much so that St. George is often depicted killing the dragon. The most famous legend tells that one day St. George passed through a city called Selem (in Libya), where a large and insatiable dragon lived in a lake who was no longer satisfied with eating the sheep offered to him by the inhabitants but wanted human beings. Then the inhabitants began to offer him their children, chosen by lot, to appease his fury. One day fate chose Princess Silene, the daughter of the local king. Just at that moment St. George arrived who killed the dragon and saved Silene. But first he had the entire population of Selem converted to Christianity. Reproduction of the statue of St. George piercing the Dragon on the site

The flag of St. George

The St. George's cross is a flag consisting of a red cross on a white background. Its origins are not clear, but it seems that the use of the flag by the Genoese, among the first to use it, dates back to around the end of the sixth century, when the Byzantine army stationed in the city and its banner (a red cross on a white background) was brought in homage to the small church of San Giorgio. The cross then became the official banner of the Republic of Genoa. The flag, due to its strong symbolic value, was used by Crusader Christians. It was later adopted by various countries, such as England, Georgia and Northern Ireland, and numerous other cities and regions around the world.

Among the various countries that have adopted the St. George's Cross, the flag in England began to spread during the Crusades: at the time, the Pope chose to mark the Crusaders according to their nationalities. Eventually the British touched the red cross on a white background, even though it had previously been assigned to the French. Then in 1190, London and England asked Genoa for permission to use the flag of San Giorgio for its ships, which were protected by the Genoese fleet from numerous piracy attacks, among other things. Then from 1277, due to its increasingly widespread use, the cross of St. George became the official flag of England, the city of London and the Royal Navy.